OMG! – The iconic art out of tape 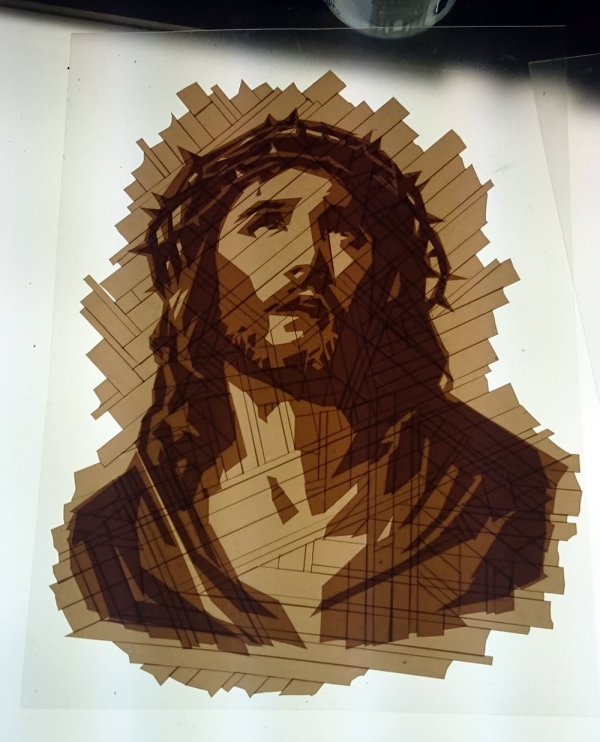 The emergence of tape art Jesus portrait from package tape

Nowadays, there are so many directions and branches in modern art as never before. Very often they are so similar, and boundaries between intentionally blurred to such an extent that it is sometimes difficult to distinguish this or that art patterns of today’s artists clearly and classify. But when it comes to Pop Art, the error of this nature is hardly possible because Pop Art has always been and remains over decades into one of the most popular art movements and many of us so familiar that such distortions would simply be improper.

Is it worth here the photo portrait of beauty Marlyn Monroe by Andy Warhol and the most famous Collage by Richard Hamilton to mention that have become modern art, but also for the far distance from the art scene actors become symbols of the era? Based on the Pop Art Culture was the American mass consumer culture, although this direction itself arose in Europe, the UK, and not in America. 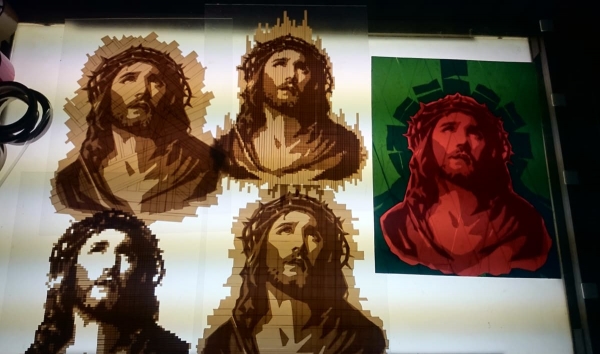 As before, serve in the pop art popular brands, advertising, and cinema as well as other well-known symbols of modern society into objects of art. For reviews and expert’s Pop Art inexhaustible ability to argue whether art is still alive; it is an opportunity for artists to realize himself and his audience to be as accessible as possible, which is due to the use of elemental and most known symbols, stereotypes, ideas become possible.

For the recipient of such art is this actually mean that he gets the opportunity to themselves and to laugh at his environment, without having to waste his mental and spiritual energy, because the eternal through art awake homemade desire to understand the problem in its root, new worship own thoughts and senses work occurs Pop and Graffiti Art to the wide, deep and fine perception of the art object is left here as never before in my life.

Nevertheless, Pop Art has large claims because it is fed one of modern art. And the very reason that Pop Art fulfills one of the most important functions of art – it reacts to what is happening in society. If the art, this function cannot be satisfied, it is hardly more than Art Studio, because of such art society and so today’s vibrant audience does not matter as it may be highly aesthetic. Pop Art responds to the slightest changes and recent trends in the life of the Company immediately and very sharp. Subjects are generally taken from comics, attention is devoured by the primitive representations and speculation with human emotions such as love, heroism, etc..

In consideration of today’s lifestyle Pop Art is like earlier popular and widespread, but no less interesting. The assumed number of artists who prefer Pop Art provokes competition between them and it means that there are new representation methods and motives searched and found that the individual artist and his works are stand out in the whole mess.

The establishment of light for this purpose seems to be a fairly original solution. The bright and saturated colors, applied as a background of the image – this is so satisfied with a classic train in Pop Art, but the colorful background that varies continuously. It is certainly the news. The light organ, experiments with colors on the screen are known for all long been and probably already made it also to become symbols of contemporary society. Therefore, the application of this method in the performing arts is nothing more than a quick-witted solution for pop and street artworks.

A short video of the “OMG” artwork in action:

Something has invented for himself and his audience of the German artist of Ukrainian origin Slava Ostap. His works “OMG” и Packing tape art on glass- “Simple pop art” are characterized by the interesting permanent color changes. Ostapchenko remains faithful to the tape. As he combined his work of packing and duct tape and all the diversity of color, he reached an impressive effect on his work. In addition, Tape Art of Ostap raises high expectations because they with their simple and inexpensive agent – are packing tape and Scotch leading to taps in Pop Art.

The “OMG” and “Simple Pop” are in fact using materials produced, requiring no mnemonic money expenses or special care. Even the selected variant of illumination is incredibly economical. Well, so do the landmarks in modern art, and the positive sides figure out there is no difficulty. Packing Tape Pop Art as a diversion of street art and Graffiti, in general, is very promising and the experiments with styles, colors and light are obvious benefits for gluing techniques. Also, the fact that tape together with all adhesive tape can type easily and harmoniously draw in in today’s art scene, its main criteria and offering the audiences always in tension, testifies to the fact that the art is alive today, no matter what kind forms they also may assume.