“Feel”- Portrait out of Packing tape 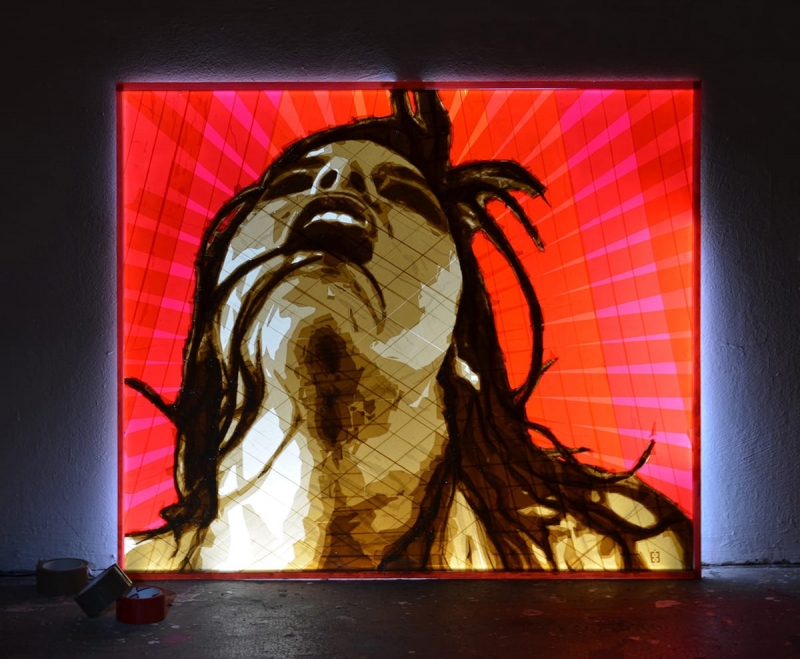 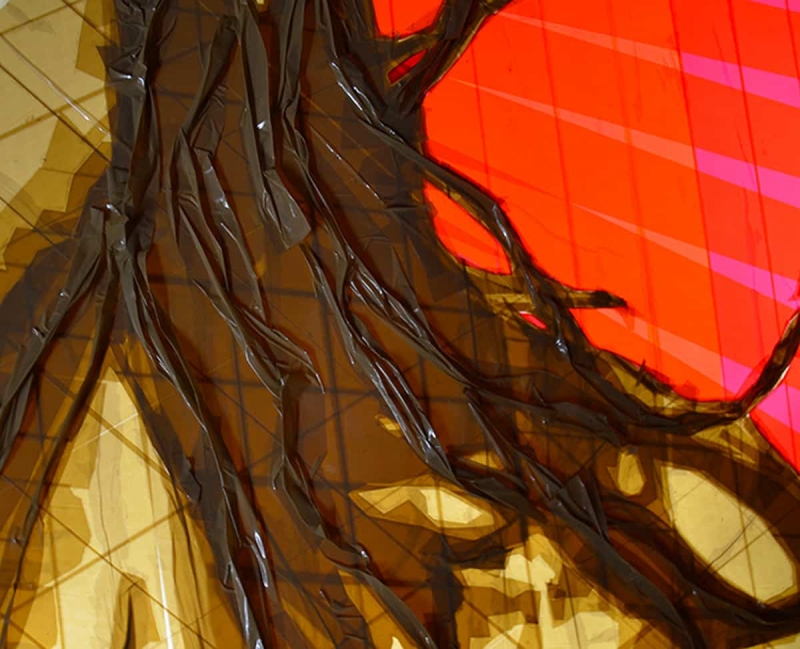 Completely filled space, rich colors, interesting and easy ambiguous subject are the main characteristics of Ostaps packing tape artwork “Feel …”.
That “Feel …” has a certain idea of what Slava using representational images attempted in such a way that the two parts of the work comply with the principles of conceptualism, can hardly go unnoticed Art when viewing this tape play. Conceptualism as a direction in performing arts – (from the Latin conceрtus -. “Thought”, “idea”) emerged in the mid 60-s of XX century in about the same time in the UK and USA. For basic principle of conceptualism is the creation of concepts, ie ideas as the only artist worth task usually. It follows that the artist only one who may be capable of producing the ideas. Because the form can be handled by each artisan, but only artists capable to devise it. Conceptualisms are the intellectualism and certain ironic existence intrinsically. The conceptualist works such as “Feel …” are in fact only really interesting when the viewer the “rules of the game” takes on and the green light gives his thoughts and associations. Conceptualism is economical, and it is here, in contrast to minimalism, the most simple and inexpensive agents preferred. Since the idea is the conceptualist work based on the pictures is – an education application as much as possible shrinking. This helps the viewer’s attention to focus on the most important – on the idea of the artist. It is the same with the tape artwork “Feel …”, which does not need emotional empathy, but it is with the brain, so intellectually perceive. “Feel …” by tape artist Ostap is made exclusively through the use of brown and red packaging tape. The first part of this duplex is also characterized by some relief similar elements.

The images themselves are also fairly saturated and none disturbs the viewer to enjoy the composition. By the first part of the work “Feel …» look at, you can see the very emotional woman face. Now really, why does the audience to look at hands, legs or body of this woman, though, according to the name of the work, the essence is what she feels, and the feelings of the people can be seen especially in his facial expression. To make maximum low to draw the viewer’s attention to the emotions depicted woman Ostap fills the background with the red color, the color of emotions, and it does not use forms or performing other details. Same principles can be observed in another part of the tape-artwork, “Feel …”. The man behind the DJ booth is not important, more important are his hands on the console – what creates music. All this as the basic canons of conceptual art is consistent with Ostap packing tape art “Feel …”, because conceptual art has actually the creation of compositions as the embodiment of thought in physical form to its purpose and objective of such compositions is the representation of the certain artistic idea. The conceptual art is concerned with the analysis of their own language. The audience is still free to exercise this idea in his own way and to interpret.

As Slava Ostap his work “Feel …” created, he remained true to his tape art style

So what of the feelings of the artist from the audience expect? If the two parts of the tape art “Feel …” connected to each other? Causing it to each other? Unless or that each of them has its own concept and it is the two accordingly be regarded as independent of each other? Newly arising issues and the desire to bear witness to answer for the artistic quality of the work. And only under this condition, the original and embodied in the work by the viewer recognizes thought and considered and perhaps also interpreted as the artist himself it makes.