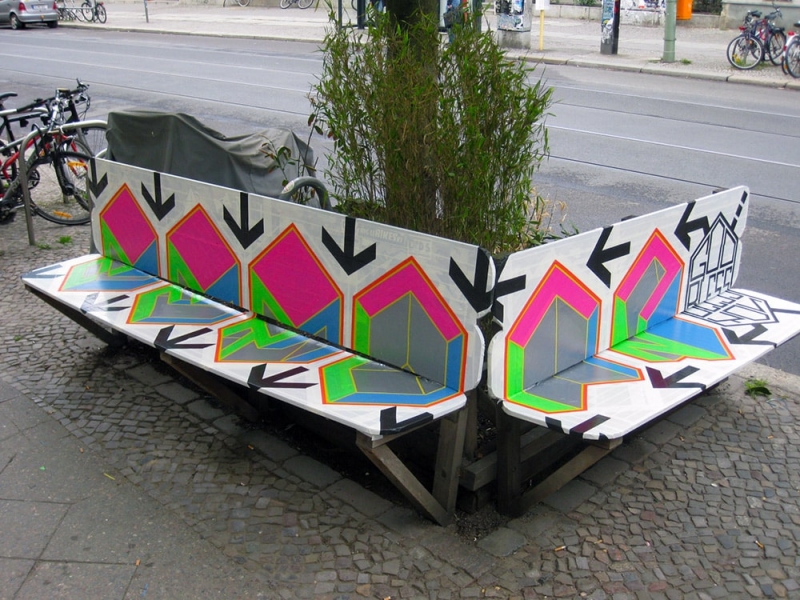 This tape public art bench in Berlin, I stuck in 2012

Each city enjoys its own atmosphere, which is creating through the local population. City of romance, city of possibilities, City of freaks. The last was undisputed city store, with its extremely looking residents, Bike and dog lovers, with houses and streets, the historical Berlin spirit among multiple layers of paint and graffiti. Here you can watch that form each other and complement each other admirable symbiosis of the city with the people. Thousands of people here think its refined thoughts through to later realize it; of vulnerable up to pompous. Some of them will be named differently freaky. 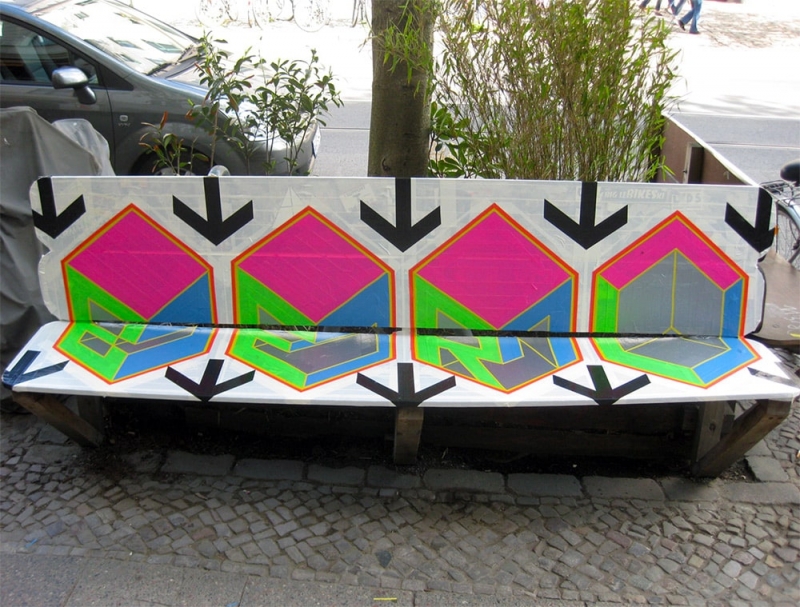 One of such wandering through the world intentions has distinguished himself settled in the capital- the city with the help of colors to make beautiful, but to use for this purpose nothing other than signaling tapes. So what exercises successfully for over 5 years Slava Ostap and a small number of other street art artists. His desire from Berlin to get something more positive emotions, he once converted a former bank in such a way that it became an Appel in the whole city, “God bless you”. Such small, marginal, on first glance objects and things like this bench, created these unique and peculiar Berlin artistic climate. 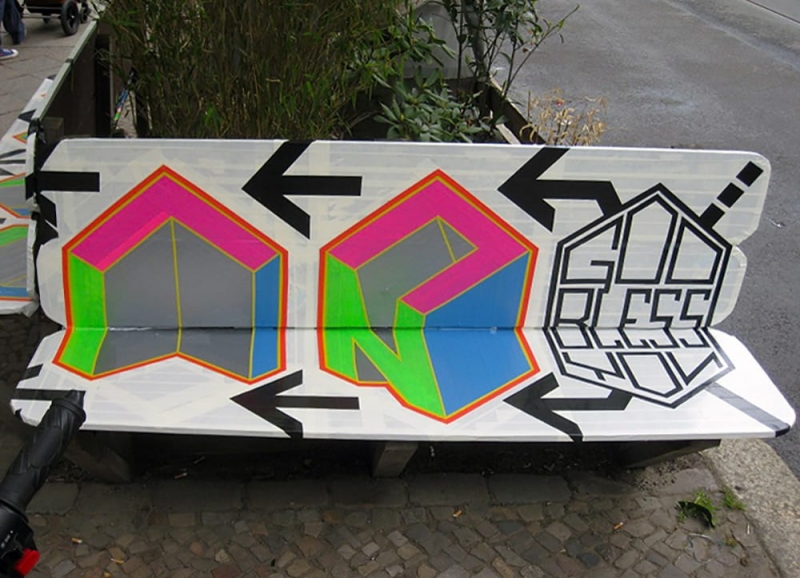 Now this bank is no longer there, it was ripped out when the road was repaired

So, how much you would need to get it right in the city something originated, what are arrested in watching for a while our eyes and only then can we go further than we have given our smiles to the environment. Ostap reveals his secrets. For tape art, just the idea, tape, knife, head, and hands are needed. But the most important is, of course, the specially selected area, densely populated and busy, or sometimes vice versa, gray and inconspicuous. This place is the Tape Art enclose all the charm, such as it happened in the case of the Bank, which acquired the blessing for the whole of Berlin. It is appropriate to mention that Ostap is also a child of this bizarre Berlin. In his hands, the work proceeds, fast and beautiful. It is then tricked meaning in everything. That is why Tape Street Art by Ostap (Ost_UP) always striking and garnish, probably with a serving of irony or hint of the uniqueness of the prospects of the artist. Even the working instrument was not chosen at random. Duct tape is advised when using very handy, he has over resistant paint of high quality, no harm to nature and human health. A tape must be removed easily from many surfaces and after his price, it is cheap and easily accessible. All this fully corresponds to the canons of modern art and life, where everything besides its main determining factor still gets a minor role. Everything is processed, modified, and gaining new life and meaning. Law default, it is then that tape graffiti from duct tape, packaging tape over and quickly conquered the city and became his regular highlight for youth and tourists.

Thus it can be described with a few words, the unpredictable city – Berlin. God bless you!