Mural artwork on a prison wall

Like many cities, Berlin – the city we live in and love – has a dark past. During the National Socialist era, many cruel acts were committed here by the Nazis. Among others, the young resistance fighter Helmuth Günther Hübener (born January 8, 1925) was sentenced to death by the Nazi‘s People’s Court and subsequently murdered at Plötzensee Prison on October 27, 1942. 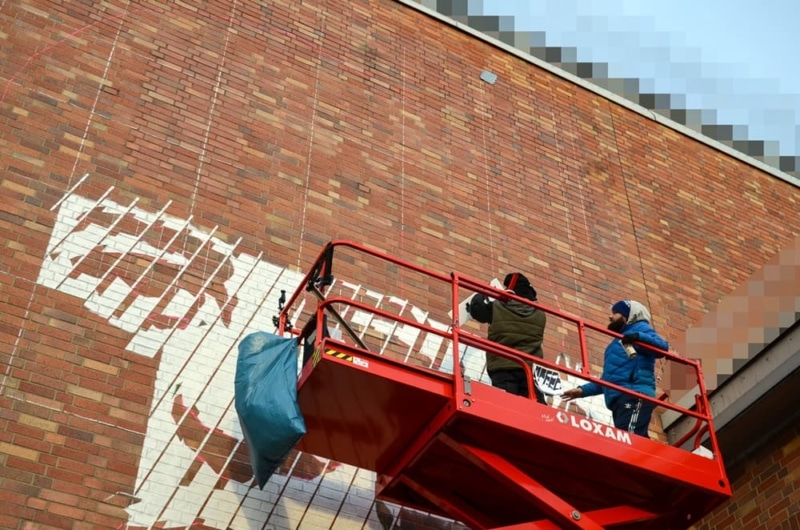 JVA-Plötzensee is an old prison complex that was built in 1879 in the Berlin district of Moabit and is still in operation. After World War II, a juvenile detention center was also established there. In 1987, it moved to new buildings on the adjacent site to the north on Friedrich-Olbricht-Damm, but also continues to use two buildings from the historic institution. One of the new buildings on the site serves as a school for juvenile inmates serving sentences in the prison. In 2019, the school was named after Helmuth Hübener. It was officially opened in January 2020.

The prison administration as well as the Berlin municipality asked us to create a piece of wall art on the school building and dedicate it to Helmuth Hübener.
We felt very honored to be allowed to realize this art project and of course agreed.

We decided to create a portrait of Helmuth Hübener. A photo from a court file served as a basis. Since a prison wall already carries a symbolic meaning in itself, we wanted to make the wall an independent and indispensable part of the artwork. The concept is that instead of simply painting a mural on the wall, we would now integrate the wall into the artwork in such a way that it would only work with it as a whole.

To paint the wall we only used white color.

The only possible contrasting color to the red brick of the prison wall was white. Moreover, in many cultures, the color symbolizes innocence, mourning, holiness, or clarity.
For a minimalist implementation of the portrait, which had to do without squiggles or embellishments, so we decided to use the halftone effect. This allowed for a reduction of paint use, and therefore the brick facade to shine through as much as possible.

Since our linear halftone grid motif consisted of rectangular segments of equal size, we cut out two stencils (approximately one meter long) of varying widths to match the segment widths of the design. To get the distances between individual image segments the same size, we also built two rulers with matching widths. 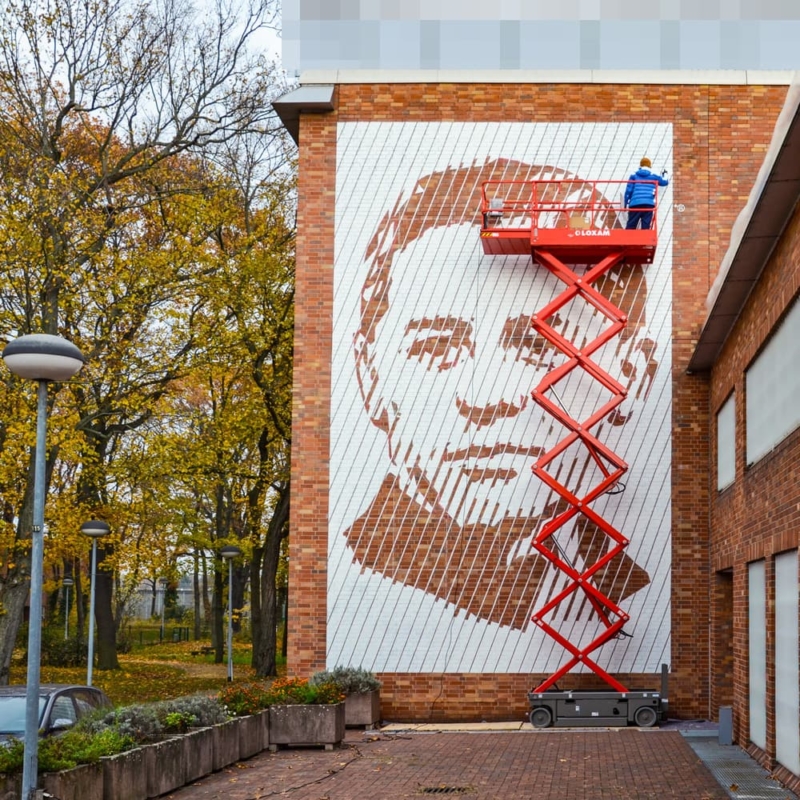 To speed up the painting process of the facade, we attached grab handles to our stencils. For narrow distances between individual picture segments, we planned with masking tape. Normally, you use painter’s masking tape specifically designed for this purpose. However, since we didn’t start painting until early December, the outside temperature was about 2 °C and the facade wall was so cold that none of the tapes we tested would actually stick to the wall. After several tests, we finally found duct tape that would stick for just under 10 minutes. This was just enough time to quickly paint one square meter of wall. So instead of taping off the entire facade right at the beginning, we had to paint the picture piece by piece. The disadvantage of this approach was that we could not see the overall picture while painting and thus could not check it. Since white spray paint cannot be cleanly removed from red brick, we could not have done any corrections. We really couldn’t afford to make any mistakes when transferring the design to the wall and when painting. Therefore, the tension during painting as well as the subsequent relief was quite big. :)

In the following time-lapse video you can follow the step-by-step creation of the mural: